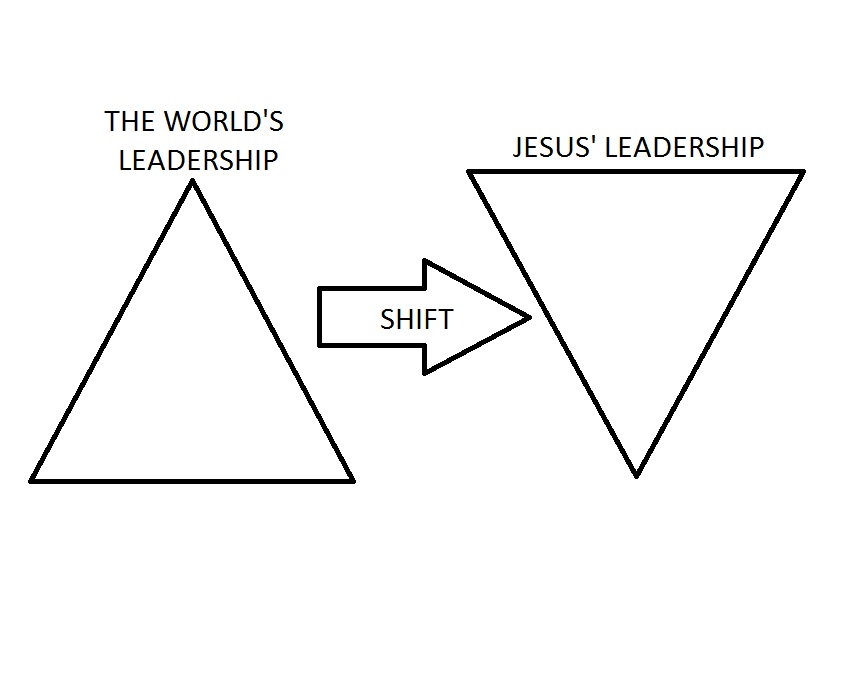 The Top Up Mindset

A great leadership mindset comes from the last supper In Mark 10:42-45, Jesus is teaching concerning his kingdom and what the leader’s mindset should be In
this setting two of the main disciples, James and John, have requested to be seated at the top in Jesus’ kingdom; on his right and left hand Their request was normal. The young men wanted a position at the top. Why is that so bad? Jesus took the opportunity to explain to them where the “top” is in his kingdom. He was about to turn their thinking upside down.
Mark 10:42—But Jesus called them to him, and saith
unto them, Ye know that they which are accounted to rule
over the Gentiles exercise lordship over them; and their
great ones exercise authority upon them.
Mark 10:43—But so shall it not be among you: but
whosoever will be great among you, shall be your minister:
Mark 10:44—And whosoever of you will be the chiefest,
shall be servant of all.
Mark 10:45—For even the Son of man came not to be
ministered unto, but to minister, and to give his life a
ransom for many.
There are two mindsets for leadership; “top up” and “bottom up”. To visualize a Jesus’ mindset, think of an equilateral triangle. The triangle with the point up represents a mindset based on authority to rule. Power is viewed as residing at
the top of the triangle and working its way down through delegation, privilege and access. The most powerful people are on the top.  The most dishonorable and common are on the bottom.  In this “point -up” triangle leaders delegate authority—influence, power and resources—to positions without reference to the
responsibilities associated with that authority. We realize it is possible for a leader to rule without specific responsibilities. It is impossible however for a leader to serve without knowing his responsibilities. More on this later.

Point-up leaders are easily affected by the upward forces of pride. If the leader’s mindset is top up, then a humble man of God could begin well but because of
his mindset shift from serving people to people serving him. Verse 42 explains the point-up leadership mindset.  It is understood in the world that they which are ordained, or accounted to rule, exercise rule and authority over the people
Point-up leaders are easily affected by the upward forces of pride. Click To TweetThe important preposition in both the original Greek words for rule, katakurieuo and katexousiazo (exercise authority) is kata, which means, “downward” or, “from above ” Point-up rulers rule from above the people from this lofty mindset, they take and maintain control over people. They have the power to dictate to those below them what they are to do. They also expect and require obedience. This mindset is accepted as normal and right. The people are under the leader to carry out the leader’s purposes. This mindset tempts leaders to be self-serving and rule over people.

Then Jesus went on to explain the other mindset for leadership, his mindset.

His explanation begins with a firm and definitive statement In verse 43, Jesus stops their way of thinking as he exclaims “It shall not be so among you!” He was saying, “My leaders will be different than other leaders. My leaders will stand out as extraordinary, remarkable and will point people to Myself.” Jesus’ mindset takes the world’s leadership triangle and turns it upside down; bottom up. He redefines greatness and power based on principles from his kingdom.
Jesus’ mindset takes the world’s leadership triangle and turns it upside down; bottom up. Click To Tweet
First, the great one among them, “megas” in the original Greek, will be the one who attends to and waits on the others. This established a new competition among leaders; a climb not for the top but rather a scramble to get to the bottom.
Second, he tells them the one who will be counted as #1, the winner of the competition, will be the servant of all. This is the famous Greek word “doulos” which means a slave; one who is submitted to the will of his master. In this case, the master is “all ” everyone he serves is his master. In Jesus’ bottom-up leadership, a leader gains influence as he serves more people. The lower he goes on the triangle, the more power from God he is given to serve. These leaders are rule over their selfishness and serve under people. So applying this mindset in a local church means, instead of having leaders at the top of a triangle in authority and ruling from above everyone, the triangle is flipped upside down.

The point of the triangle is down and the triangle is bottom up. The bottom-up triangle represents leadership where the pastor and the elders serve the entire church. They and the other church leaders are under everyone and have the responsibility and authority to act for the welfare, safety, and spiritual prosperity of everyone in the church; especially the most uncomely and dishonorable. When a leader goes to the cross and loses the rights to his own advantage and interests, he becomes empowered by the Holy Spirit and the resurrection life of Christ to be a good shepherd. Rather than rule, he serves rather than control, he sets people free. This is bottom-up leadership.