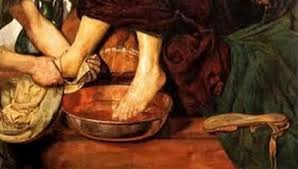 A leader’s mindset will determine how he sees himself and treats others. A great leader’s mindset is found in John 13 where Jesus washed the feet of his disciples. The story is well known and has many applications, but for this blog I will concentrate on the mindset of the
disciples versus that of Jesus. The disciples, especially Peter, were living in the worldly, normal, and accepted understanding of leadership. Peter’s responses to the lord’s initiations revealed that within him there was a framework for his thinking that, if
things didn’t change, it would keep him from being a leader in Jesus’ kingdom. In the disciples hearts, the world had painted a picture of three levels of men; masters, common people and servants. They were the common men waiting for the master and there were no servants in the room. That’s why their feet weren’t washed. There was no servant among them to wash them. None of them had a problem that their feet were dirty because there was no servant. They all understood and no one considered it strange and none thought of becoming a servant. When Jesus came in, he saw the situation and the Holy Spirit took the opportunity to show these future leaders a critical leadership lesson. In Jesus’ heart there were just two levels of men—common people and servants. There were no masters. Jesus though the Master was not sitting in the worldly master’s seat. What he was about to show them is the single greatest principle of his kingdom—servant leadership.What he was about to show them is the single greatest principle of his kingdom—servant leadership. Click To Tweet  The master took the servant’s place and began washing the disciples’ feet. This is huge. He was trampling over millennia of leadership understanding. He was demolishing their concepts of leadership in order to build a new framework within them that would authorize and empower them to lead in his church. Jesus made it crystal clear to all of them, especially Peter, that the world’s system of ruling over and being obeyed, demanding honor and giving positions to friends and loyalists would disqualify them from a place on his leadership team. There is no middle ground in Jesus’ kingdom; either we let Jesus serve
us and then through his cross By his Spirit we follow his example to serve one another, or we have no position in his kingdom. How grave are the consequences for the leader and
the church when a man occupies the seat of a pastor but lacks the “no masters” mindset.
John 13:8—Peter saith unto him, Thou shalt never wash my feet. Jesus answered him, If I wash thee not, thou hast no part with me.
John 13:13—Ye call me Master and Lord: and ye say well; for so I am.
John 13:14—If I then, your Lord and Master, have washed your feet; ye also ought to wash one another’s feet.